Film stocks are vanishing, but the image remains, albeit in a new, sleeker format. Today, viewers can instantly stream movies on demand on televisions, computers, and smartphones. Long gone are the days when films could only be seen in theaters; videos are now accessible at the click of a virtual button, and there are no reels, tapes, or discs to store. Any product that is worth keeping may be collected in the virtual cloud and accessed at will through services like Netflix, Hulu, and Amazon Instant.

The movies have changed, and we are changing with them. The ways we communicate, receive information, travel, and socialize have all been revolutionized. In Streaming: Movies, Media, and Instant Access, Wheeler Winston Dixon reveals the positive and negative consequences of the transition to digital formatting and distribution, exploring the ways in which digital cinema has altered contemporary filmmaking and our culture. Many industry professionals and audience members feel that the new format fundamentally alters the art while others laud the liberation of the moving image from the “imperfect” medium of film, asserting that it is both inevitable and desirable. Dixon argues that the change is neither good nor bad; it’s simply a fact.

This groundbreaking book illuminates the challenges of preserving digital media and explores what stands to be lost, from the rich hues present in film stocks to the classic movies that are not profitable enough to offer as streaming video. Dixon also investigates the financial challenges of the new distribution model, the incorporation of new content such as webisodes, and the issue of ownership in an age when companies have the power to pull purchased items from consumer devices at their own discretion.

Streaming touches upon every aspect of the shift to digital production and distribution. It not only explains how the new technology is affecting movies, music, books, and games, but also how instant access is permanently changing the habits of viewers and influencing our culture.

“Dixon has written a lively, opinionated, and detailed up-to-the-minute dispatch on the current state of the moving-image media as they experience a period of rapid transition marked by instability and uncertainty regarding the future of viewing and exhibition practices. It is a timely and urgent contribution to current scholarship in the constantly evolving discipline of media studies.”—David Sterritt, author of Screening the Beats: Media Culture and the Beat Sensibility

“Dixon’s book offers a cogent overview of the history of digital film production and its impact on traditional filmmaking. His work is more than just a historical map of the development of digitalized filmmaking, but also a socio-cultural and psychological study of how digitally formed film will (and does) impact viewers. Streaming will make a significant contribution to the field, as no scholar has yet looked at digital cinema and its impact on the socio-cultural experience of viewing film.”—Valerie Orlando, author of Screening Morocco: Contemporary Film in a Changing Society

"In this expansive, elegantly written and engaging study, Dixon attempts nothing less than to rethink the future of cinema in a digital age. Exploring the ways in which the Hollywood model of embracing digital production is spreading throughout the world, Streaming complicates, illuminates, and extends our understanding of the current media landscape."—Patrice Petro, Professor of English, Film Studies and Global Studies, University of Wisconsin-Milwaukee

"'Today, the choice between streaming and hard-copy technology is the major divide in consumer viewing habits' writes Wheeler Winston Dixon in Streaming: Movies, Media and Instant Access, a worthy addition to the growing chorus questioning the breakneck conversion to digital. Dixon fears that conventional film will soon be available only to archaeologists of 20th-century culture, leaving audiences stuck with the 'hyperreal glossiness' of HD. Only a handful of repetory cinemas will serve as sanctuaries from DCP, if liberating ourselves from the couch remains an option in the author's occasionally hyperbolic vision of a future under house arrest.

Even classic films on cable are cut to ribbons, he laments, and foreign and 'orphan' films have no chance at all in a Redbox-heavy diet . . . the real doomsaying is reserved for the book's second half, which explores the extremes of the wired universe: the perils of facial recognition software, Web apps that cater to stalkers, 'body implants' that would display images and entertainment 'inside your head,' and Facebook tapping into 'the essence of your being' for advertisers. Having only dabbled in social media, I nonetheless set down Dixon's book feeling like Harry Caul in The Conversation when he realizes that the complimentary pen slipped into his pocket is actually a bugging device." —James Hughes, Film Comment, March-April 2013

​“The streaming of media content is revolutionizing how consumers access movies, music, and literature. Dixon examines the influence of this technological shift on contemporary filmmaking and viewing and its wider impact for consumers of all types. The author, an authoritative source on the subject, briefly tells readers how streaming video works and how the shift toward digitization has changed the industry playing field and describes emerging technologies that will continue to affect the consumer experience. Dixon also explores the consequences of the disappearance of film stock on filmmakers, particularly small, independent ones, and what he calls the ‘lost age of Classicism.’ Dixon succeeds in creating an engaging and interesting read that summarizes how streaming is changing both entertainment production and consumption in far-reaching ways.” – Dave Valencia, Library Journal 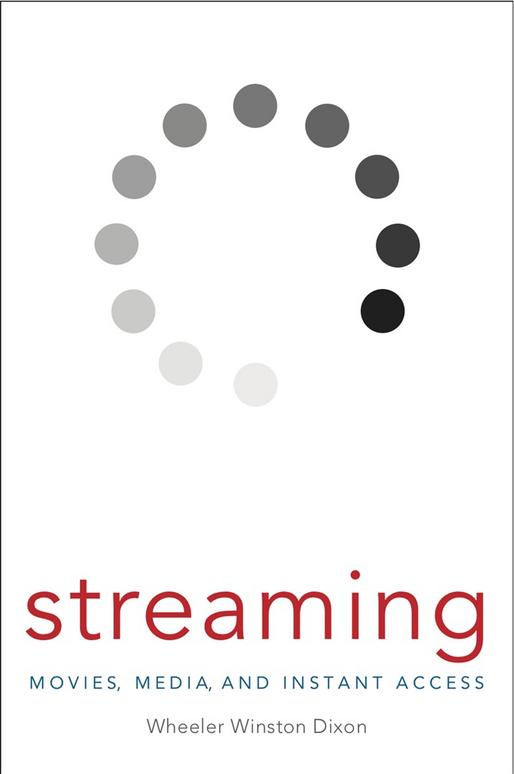