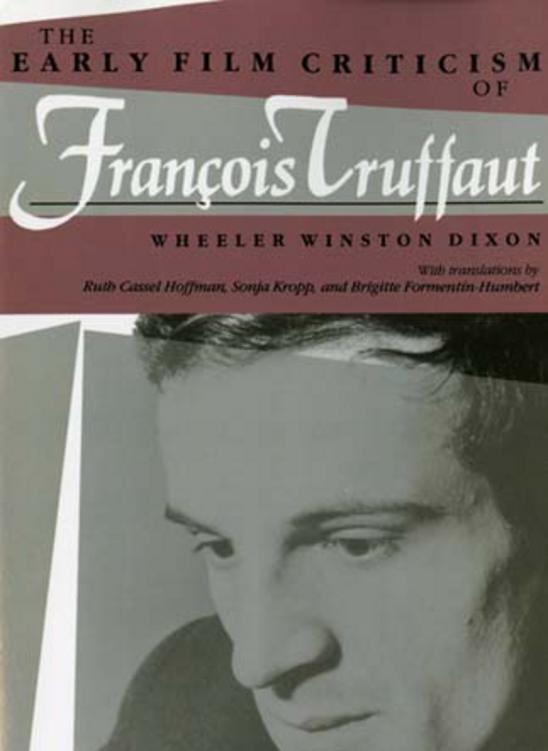 Before turning to filmmaking, François Truffaut was a film critic writing for Cahiers du Cinéma and other small journals during the 1950s. The Early Film Criticism of François Truffaut makes available, for the first time in English, articles that originally appeared in French journals such as Cahiers du Cinéma and Arts. Truffaut discusses films by such acknowledged masters as Hitchcock, Huston, Dymtryk, and Lang, but also examines the work of such lesser-known directors as Robert Wise, Don Weis and Roger Vadim.

“. . . Wheeler Winston Dixon proposes that the existing Truffaut criticism in English is incomplete and unrepresentative [. . .] reproducing only pieces on canonized 'A' films such as Nicholas Ray’s Johnny Guitar or Jacques Becker’s Touchez pas au grisbi, ignoring Truffaut’s writing on lesser known [films . . .] crucial to the elaboration of the politique des auteurs. [Dixon’s] book is a collection of hitherto untranslated pieces by Truffaut on a wide range of lesser-known [. . .] movies, as well as a few on more classic [films], such as Marilyn Monroe in Niagara and Brigitte Bardot in Et Dieu… créa la femme, linked by Dixon’s commentary on the articles [. . .]

[Dixon's] book will be welcomed by students and scholars of both Hollywood cinema and auteur criticism, since it not only extends the range of materials available in English, but also reproduces texts which are difficult to get hold of even for readers of French, such as the articles from [the journal] Arts [. . .] the astonishing piece on Niagara (‘Beneath those skimpy skirts, those bosoms heaving with joy, there is said to be nothing, no underwear’) only confirms what is clear from Truffaut’s films, namely, as Dixon says, that Truffaut is expressing ‘his own sexual voraciousness, which seems deeply rooted in childhood fears and fantasies.’

Similarly, the piece on The Quatermass Xperiment simply reiterates Truffaut’s prejudices against British cinema: ‘A film is a born loser because it is English. Even a good script filmed by a good director and performed by good actors will most likely end up as a bad film. Why? This is the only mystery that English cinema has in store for us.’ And [Truffaut’s] hatred of popular French cinema of the time, manifest in a piece entitled 1956: Five Great Films, Seven Good Ones, An Event: It Is Proved That Cinema Can Do Without Scriptwriters echoes [Truffaut’s famous essay A Certain Tendency of the French Cinema].

Dixon’s book is [. . .] an excellent read. Truffaut’s film criticism is, as Dixon says, ‘opinionated and idiosyncratic.’ It is, however, enjoyable and insightful, despite the occasional incoherence and blind spots. It also offers the nostalgic pleasures of vital polemical tradition of film reviewing which has all but disappeared, and of which the young Truffaut was a prime exponent." – Ginette Vincendeau, Sight and Sound.

"Dixon's study expands and revises our understanding of Truffaut's career at Cahiers. By providing many first translations of Truffaut's prolific, detailed and idiosyncratic reviews of [Hollywood films], Dixon not only enhances our appreciation of this director's astonishingly eclectic love for movies but calls into question the more narrow critical concerns of readers like myself. This book serves as a valuable corrective to our received views of both the auteur theory and the classical Hollywood cinema." - Lloyd Michaels, Editor, Film Criticism