Ever since horror leapt from popular fiction to the silver screen in the late 1890s, viewers have experienced fear and pleasure in exquisite combination. Arranged by decades, with outliers and franchise films overlapping some years, this one-stop sourcebook unearths the historical origins of characters such as Dracula, Frankenstein, and the Wolfman and their various incarnations in film from the silent era to comedic sequels. A History of Horror explores how the horror film fits into the Hollywood studio system and how its enormous success in American and European culture expanded globally over time.

Dixon examines key periods in the horror film—in which the basic precepts of the genre were established, then burnished into conveniently reliable and malleable forms, and then, after collapsing into parody, rose again and again to create new levels of intensity and menace. A History of Horror, supported by rare stills from classic films, brings fifty timeless horror films into frightfully clear focus, zooms in on today’s top horror web sites, and champions the stars, directors, and subgenres that make the horror film so exciting and popular with contemporary audiences. More than 50 rare stills from classic examples of the genre illustrate the text.

"This is an excellent survey of horror movies. The author, a veteran film historian, takes the reader back to the beginning, when, in the first three decades of the twentieth century, such directors as Georges Melies, F. W. Murnau, and Paul Wegener were defining not only the look of a genre but also cinema itself. The period between 1930 and the late 1940s saw the rise of the classic Universal Studios characters —Frankenstein’s monster, Dracula, the Wolf Man, the Mummy—and the actors who played them: Karloff, Lugosi, Chaney Jr. By the end of the 1940s, horror was dying, 'killed by a plethora of poorly made sequels.'

But never fear: the period between the late ‘40s and 1970 saw a massive resurgence, due in part to gimmicks (such as 3-D); low-budget quickies from the likes of Roger Corman, the wizard of the B movie; and the stylish resurrection of the classic Universal monsters by Britain’s Hammer Film Productions. This survey, which takes the reader right up to the present, is full of fascinating information and is delivered in an accessible manner. Required reading for horror fans." — David Pitt, Booklist, August 4, 2010

"Dixon surveys the development of the horror genre from the earliest Frankenstein and Dracula films through the decades of classics by Hammer studios, William Castle, Roger Corman, and Val Lewton. Dixon covers movies seldom found in other histories and more modern, international titles such as Wolf Creek, Black Water, and The Grudge.

The endurance of horror, trends like remakes and sequels, and such popular franchises as Child's Play and Halloween are also discussed. In the final chapter, Dixon analyzes the decline of modern horror owing to desensitized audiences, graphic gore, violence, and lack of solid plot lines or character development. Lists of the best horror websites as well as the 50 movies covered round out this volume [. . .] Recommended for all libraries." —Rosalind Dayen, Library Journal, September 16, 2010.

"In less than 250 pages, author Wheeler Winston Dixon manages to cover the trends and sub-genres of film horror from 1896 to 2009. Bonuses include a list of top horror sites, a list of fifty classic films, and a pretty wonderful bibliography. Dixon offers analysis without lapsing into academic language. He also provides the occasional behind-the-scenes anecdote. The main purpose of A History of Horror, however, seems to be delineating themes and trends as they work their way through each generation of horror filmmaking.

At this the author excels, and the result is much more useful to fans than the clumsy attempts at thematic links provided by Amazon and Netflix. I found several titles that were completely unfamiliar to me and added them to my 'watch instantly' list [. . . ] Well written and well researched [. . . ] and offering an enjoyable overview of more than one hundred years of cinema, A History of Horror is a quick, delightful read. If you appreciate lucid, informed, but not stuffy analysis, here's your guide." — S. P. Miskowski, The Seattle Post Intelligencer, November 5, 2010

“[Dixon's] book is a page-turner!  It is a fabulous piece of work.  A breathtaking panorama, written with wit and candor, showing how the horror film has shaped cinema from its the origins of the genre until now.  I am really thrilled by the way A History of Horror refuses to fetishize the horror film at the same time it brings into view the complexities of history informing the genre.  The very critical assessment of recent films in the final pages is a reminder to readers and filmmakers that, as the author has done himself, they would do well to take keen note of its rich and variegated past in view of its reinvention.” --Tom Conley, Harvard University

“Rich with excellent illustrations and clever anecdotes, this book will appeal to fans of horror as well as film students and scholars interested in a readable overview of the history of the genre.” -- Rebecca Bell-Metereau, author of Hollywood Androgyny

“There is a wealth of research material here for anyone willing to follow Dixon’s many threads [. . .] the author offers generous and moving portraits of three American giants of horror: Bela Lugosi, Boris Karloff, and Lon Chaney, Jr. [. . .] Dixon’s book is illustrated with a sprinkling of photos from the classic moments of the horror film genre. We see Lugosi as Count Dracula, Karloff as the Frankenstein monster, Linda Blair looking possessed, Sissy Spacek covered with blood in Carrie, an unusually maniacal Jack Nicholson from The Shining, and more gore-bedecked actors than one could shake a skull at.” -- Martin A. David, New York Journal of Books

"The metric ton of movies listed in Wheeler Winston Dixon’s A History of Horror could have easily overwhelmed. However, thanks to witty and clever summations, as well as his ability to group films in such a way as to provide an excellent overview, the book is a breeze for this horror fan . . . even a casual reader will find themselves needing to keep a notepad handy, so as to keep track of everything you’ll want to search out." --Nick Spacek, Rock Star Journalist 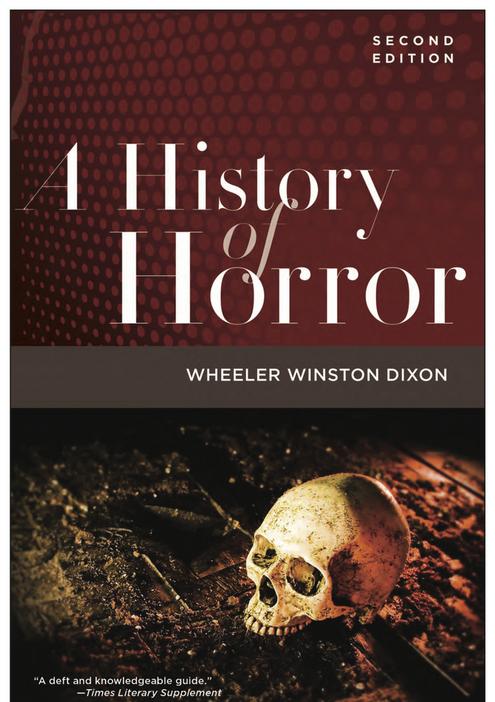