"Dixon seeks to broaden the scope and definition of film noir by focusing on its most dominant motif--paranoia. Concentrating on that impulse, and also on fear and violence, the author demonstrates that these all-encompassing aspects of film noir are found not only in gangster/detective films of the 1940s but also in such genres as science fiction and horror.

Beginning with the pre-Code era, Dixon guides the reader through a comprehensive overview of the evolution of film noir to its present form, along the way presenting an enlightening examination of American and British society and politics and revealing the role film noir has played during certain periods. He demonstrates how film noir serves to contradict the false "feel good" images mediated to the public through movies and television programming.

[Dixon]'s observations illustrate how paranoia, as constructed through the lens of film noir, proves more relevant than ever in lieu of the veil of fear that envelops every aspect of post-9/11 life. A wonderful addition to the literature on film noir and film genres. Summing Up: Highly recommended. Lower-division undergraduates through faculty." -- A. F. Winstead, Choice, September 2009.

"[Film Noir and the Cinema of Paranoia] offers an impressive catalogue of marginal and forgotten films of the studio era, accompanied by handfuls of Hollywood Babylon dirt for added impact [ . . .] noir addicts will [ . . .] walk away with one hell of a screening list." -- José Teodoro, Film Comment (July-August 2009)

"In Film Noir and the Cinema of Paranoia, Dixon displays a true cinephile's fascination with the gunslingers and femmes fatales of film noir, and the dark, uneasy world they inhabit. Wide-ranging and packed with compelling detail, this work will be an invaluable addition to the bookshelves of fans, academics and completists alike." - Mikita Brottman, author of The Solitary Vice

"Wheeler Winston Dixon is the intrepid sleuth of cinema studies, tracking down film noir in places where most of us never thought to look, seeing through the aliases and disguises - horror noir, western noir, musical noir, and more - that have kept its infinite variety in the shadows until now. Writing with nonstop energy and verve, Dixon explodes narrow definitions of noir as conclusively as the Great Whatsit blew up postwar innocence in Kiss Me Deadly. His timely, spirited book is a boon for film scholars, general readers, and movie buffs alike." - David Sterritt, Chairman, National Society of Film Critics 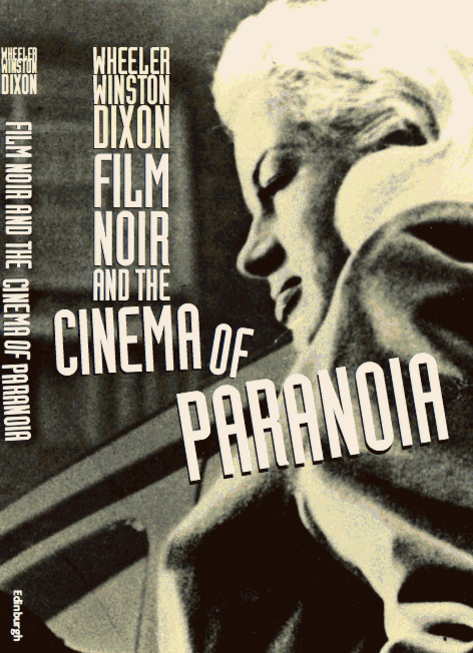